Home News item laying hen and lactating sow Ronozyme WX also approved for laying hens and lactating sows
Text by: Animal Nutritionist Dr. I. Gantois, DSM Nutritonal Products]
RONOZYME® WX (4a1607i) has recently also been approved in feeds for laying hens and lactating sows. The extension of the registration means that RONOZYME® WX is now EU-registered for use in almost all poultry and pig feeds. This is good news for feed manufacturers who add themselves directly the enzyme to the feed: from now on, they can use the same enzyme in their various feeds for poultry and pigs.
RONOZYME® WX is a pure endo-1.4-xylanase (= mono-carbohydrase) which is added to animal feed to increase the digestibility of the fraction non-starch polysaccharides (NSP). In other words, it does not contain any other additional or side activities and only breaks down the arabinoxylans, being by far the most important NSP fraction in both poultry and pig feed. The range of carbohydrase enzymes in the market is extensive: more than 10 commercial carbohydrase preparations are EU registered. This often faces nutritionists with a difficult choice. One frequently recurring question from the sector is whether we should opt for pure xylanase (e.g. RONOZYME® WX) or for a multi-carbohydrase (e.g. RONOZYME® MultiGrain).
Mono or multi-carbohydrase?
It goes without saying that the NSP composition of a feed depends on its raw material composition. Nevertheless, the arabinoxylans form the largest NSP fraction in almost all types of animal feed. In addition, feeds also contain the ß-glucans, cellulose, pectins, etc., which the animal itself cannot break down neither. Particularly in feeds containing much barley, oats or soy alternatives (rapeseed and sunflower meal), the NSP composition can look entirely different than it does in a wheat/soy feed.
A recent broiler trial in the Netherlands (PRIC, Emmen) compared two mono and two multi-carbohydrases in a feed containing 10% oats and 7% rapeseed and sunflower meal. Two other registered carbohydrases were tested in addition to RONOZYME® WX and RONOZYME® MultiGrain. The various enzymes were added on top of the feed, at their recommended dose. Only the mono-carbohydrases showed a significant improvement in feed conversion. In fact, one of the multi-carbohydrases that was tested, resulted even in a significant drop in final weight compared to the other enzymes. When chickens were fed RONOZYME® WX or RONOZYME® MultiGrain, a trend towards drier litter was noted. In this trial, the use of a multi-carbohydrase offered no added value, despite the presence of additional oat and soy alternatives in the trial feeds.
Use in laying hens
The beneficial effects of RONOZYME WX have not only been proven in broilers. As part of the registration process, several trials were also performed with laying hens in collaboration with universities or research centres (e.g. Schothorst, IRTA, SCUR...). All these trials observed improved feed conversion: more egg mass with less feed. Furthermore, adding RONOZYME® WX resulted in a decrease in the number of dirty eggs, which may be a direct consequence of reduced viscosity in the intestine.

In all trials, RONOZYME® WX was added on top, resulting in improved feed utilisation. In practice, calculation with a matrix value for RONOZYME® WX is often the method of choice. This ultimately results in a more economical laying hen feed, with constant production levels.
Use in lactating sows
In lactating sows, the use of a carbohydrase is relatively new and not standard as yet. Until a few years ago, not a single carbohydrase was EU registered for sows. In contrast to young pigs, adult sows were assumed to have a fully developed intestinal microbiome that can normally break down the NSP fraction to a sufficient degree, even without adding a carbohydrase to the feed.

Three trials have now shown that adding RONOZYME® WX to the feed of lactating sows increases the faecal nutrient digestibility by 2 to 3%. As a result, even “adult” pigs get more nutrients released from the feed. The increased nutrient uptake is particularly important after farrowing, when the sow comes into a negative energy balance. With the addition of RONOZYME® WX to the feed, the sow has to rely less on her own body reserves during lactation, so that she will be losing less weight during lactation. There is no doubt that this ultimately benefits fertility and longevity.

In lactating sows, we recommend adding RONOZYME® WX on top, i.e. without using a matrix value for the enzyme. This way, the sow can use all additional energy released by the enzyme for milk production. Carbohydrases have not yet been registered in feeds for pregnant sows.
Recommended doses
RONOZYME® WX 2000 (CT) is a dry, granulated product which is heat stable in pelleted feed thanks to its special coating. At higher temperatures (> 85°C) in combination with added steam, RONOZYME WX 2000 Liquid is recommended.
The minimum and recommended doses for RONOZYME® WX are: 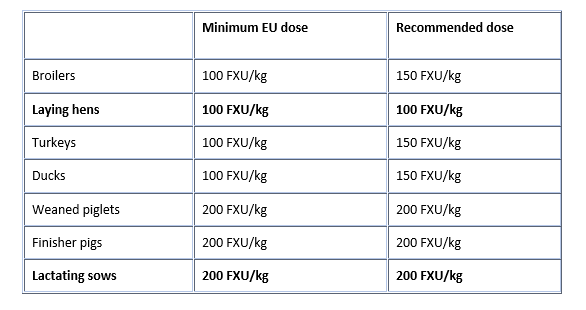