Home News item Pigs Vitamins and animal health: it works! (2)
Conventionally reared, suckling piglets are highly dependent on the sow for micronutrients. Transmission begins during gestation (prenatal) and continues after farrowing (postnatal) through colostrum and milk. An adequate supply is crucial, as the gestation and suckling period comprises almost half of the animal's life cycle. Modern, highly fertile sows sometimes fail to transfer enough of these essential minerals. These sows have larger litters of piglets than in the past. This requires a more intensive metabolism and a higher intake of micronutrients by the sow and her unborn piglets.
Perinatal transfer
The perinatal transfer of micronutrients in pigs has been studied recently (Matte & Audet, 2020). There is an active transfer during gestation for most B vitamins and vitamin C (Table 1). The prenatal transfer is insufficient for the fat-soluble vitamins and vitamins B2, B3 and B9 , which is related to the epitheliochorial structure of the placenta. After farrowing, active transfer is apparent except for vitamins B6 and B8 (biotin).  On balance, piglets receive sufficient micronutrients in the perinatal phase. Other routes of transfer are necessary for vitamins A and D and some trace elements. Examples of methods used in practice are a dose of iron injected shortly after birth or providing organic selenium.
Table 1. Perinatal transfer of micronutrients relative to animal requirements.

* Prenatal transfer refers to the ratio between concentrations of micronutrients in the serum of newborn piglets before colostrum intake and those of sows before farrowing. The symbols -, ≈, and + indicate limited, passive or active transfer of the micronutrient.
** Postnatal transfer refers to the ratio between post-colostral serum concentrations and those of the newborn piglets before the first colostrum intake. The symbols -, ≈ and + indicate limited, neutral or active transfer of the micronutrient.
*** Perinatal transfer refers to the ratio between the concentrations of micronutrients measured in the serum of sows just before farrowing and in piglets aged three days. This parameter indicates whether the post-colostral status of the piglets on day three (combination of in-utero and colostrum transfer), is less, equal or greater than that of the sow at the end of gestation. The symbols -, ≈ and + indicate this.
Perinatal transfer is derived from the plasma concentration of the sow before farrowing and that of the piglets on day three after farrowing. A shift from the colostrum phase to the milk phase may occur during this period, causing some dilution. This may suggest that insufficient nutrients have been transferred through the colostrum.
Table 2 shows further evaluation. The (estimated) intake of micronutrients per day was compared to the minimum requirement known from the literature (NRC, 2012). In the colostrum phase, there seems to be an insufficient intake of Vitamin D especially. The vitamin D concentration in colostrum is 43x lower than in the sow's plasma. The estimated intake is 6.5 IU/kg LW (1.4kg LW and 430g/d of colostrum). The first NRC standard for piglets at 5 kg is 11.8 IU/kg LW. Colostrum is therefore an inadequate source of vitamin D. For other micronutrients with an intake from colostrum that is below the NRC standard, the transfer during gestation probably satisfies the demand.
Table 2. Daily intake of vitamins and trace elements vs. need (NRC, 2012). * 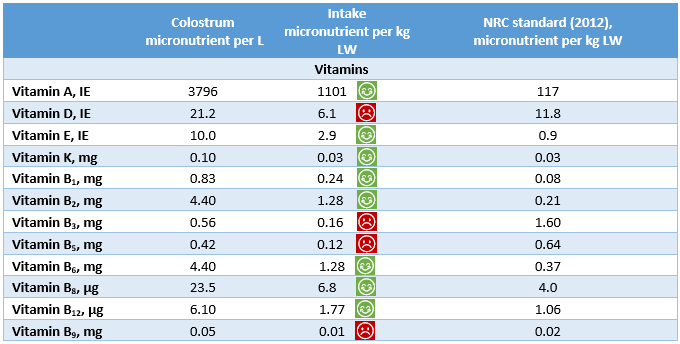 * The calculation assumes a piglet of 1.4kg LW, 430g/d colostrum, density of colostrum 1.06 kg/L.
Other transfer routes of micronutrients
With the help of their gut flora, animals also synthesise vitamins themselves, including B vitamins and vitamin K. The synthesis and utilisation of vitamins at gut level was first established in observations of coprophagy in rodents. Rats can consume 50-65% of their faeces and therefore have no need to intake certain B vitamins through feed.
Although coprophagy as a behavior is negligible in conventional pig farming, it does occur in housing systems without slatted floors. Housing, therefore, affects coprophagic behavior and consequently microflora, bacterial synthesis and vitamin intake in pigs.
Coprophagy, rooting in the soil, and eating plant material can be important sources of micronutrients (Figure 2) and compensate for deficiencies from perinatal transfer. For example, relatively large amounts of vitamin A (beta-carotene), Cu, Fe and Se are absorbed through eating plant material.
The positive influence of natural daylight and skin pigmentation on the vitamin D status is well-known. The Dutch Animal Health Service (GD) recorded vitamin D levels averaging 133 nmol/L on seven organic farms, whereas in conventionally housed animals this was 88 nmol/L.
In relation to fat-soluble vitamins in particular, supplementary feeding strategies were examined. The feed industry must observe a legal maximum for vitamin A. The precursor β-carotene which is accessible from plants can be absorbed and utilised by piglets (Schweigert et al., 1995). 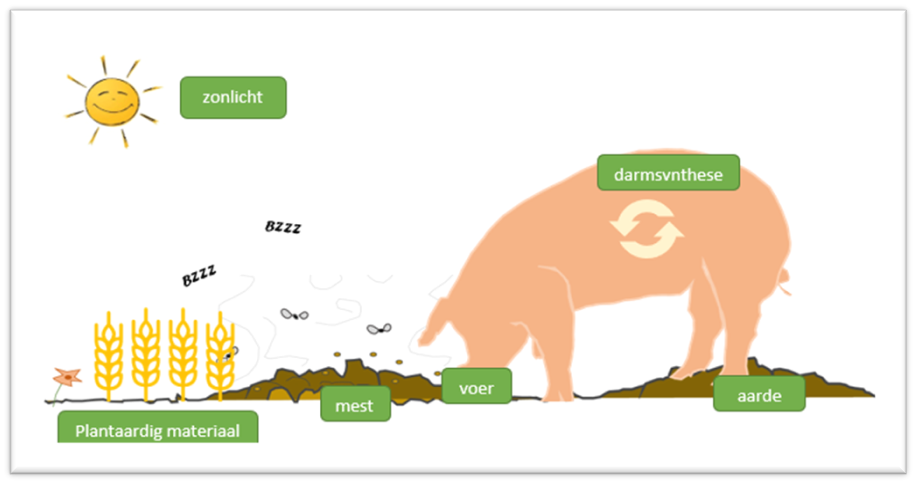 Figure 2. Sources of vitamins and trace elements for the pig, housed in (organic) natural conditions. Some of these sources are unavailable to conventionally housed animals.
Replacing vitamin D3 with vitamin HyD in feed for gestating sows results in a marked increase in the blood circulating form of this vitamin in newborn piglets. However, a 40% improvement over the value in Table 2 still results in an intake well below the NRC standard (DSM).
Extra vitamin E in the feed at the end of gestation results in higher values in the sow's plasma, in the colostrum and in the piglets. The researchers also observed an increased fat content (energy!) in the colostrum and higher Ig concentrations (Wang et al., 2017). Replacing vitamin E in sow feed with vitamin C results in higher vitamin E levels in the piglets (Pinelli-Saavedra & Scaife, 2005).
The next article will explain the importance of vitamin transfer and provision through animal feed in relation to animal health in greater detail.
All news items