[ Written by: Kevin Truyts, MSc. ]
It is well known that yeast formulations and extracts can have benefits for dogs, through their positive effects on the microflora and immune system, and therefore on the health and well-being of the animals. Two key components of these yeast formulations that have been shown to boost metabolic health are mannan-oligosaccharides (MOS) and β-glucans (βGS) both derived from the yeast cell wall.
Leva-MOS developed by DSM is a nutritional additive based on yeast cell walls with a specific combination and high content of MOS and ßGS (see picture 1), which originate from the baker‘s yeast Saccharomyces cerevisiae. DSM has combined two areas of expertise in this: firstly, the knowledge within the Animal Nutrition & Health department about the nutritional components needed by a dog or cat, and secondly, the more than 70 years of experience of nutritional specialists (DSM Food Specialties department) in the field of technology and making yeast-based products. 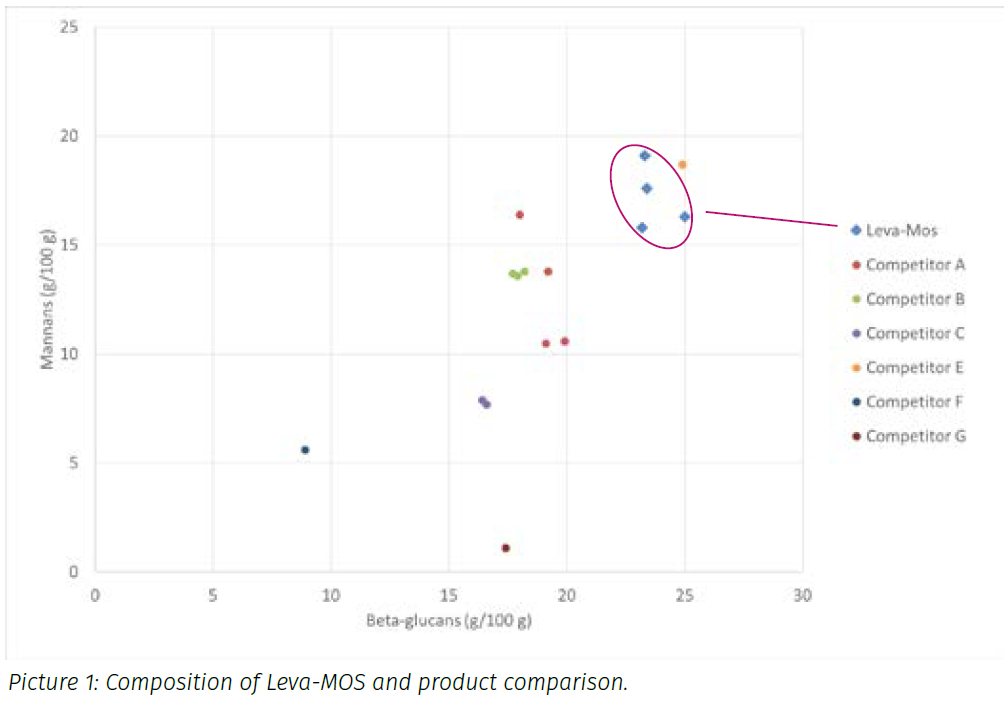 Mechanism of action βGS
The immunomodulatory properties of βGS can have a positive influence on both innate and acquired immunity. When βGS are added as a food supplement, they attach to the cell wall of pathogens. In response, leukocytes adhere to the βGS, triggering phagocytosis and the destruction of pathogens by the innate immune system. At the same time, the leukocytes release cytokines, which are natural antigens that stimulate the production of antibodies and reduce the risk of inflammation by activating the systemic/adaptive immune system.
To fight the pathogen that invades the body, it is essential that the innate immune system react quickly. βGS can also stimulate monocytes, dendritic cells, natural killer cells and neutrophils. The benefit for the dog is improved resistance to bacterial infections due to an improvement of the immune system.
Practical application of Leva-Mos
In order to see the effects of a yeast product, not only the content of the active ingredient is important, but also the uniform delivery of these ingredients into the daily ration, even with a relatively low addition of 0.5 to 1 kg/t. Hence, the physical form of the product in terms of processing and mixing in the feed mill is essential. Hence, the physical form of the product in terms of processing and mixing in the feed mill is essential. The Leva-MOS production process results in very small (54 μm) and stable particles, which improves both functionality and processing (low dust and free flow) and enables homogeneous distribution after addition into the pet food.
For the pet owner, βGS and MOS in products such as Leva-MOS are particularly interesting because they help to maintain a stable intestinal microbiota, even during ration changes or stress. This supports the dog and is reflected in improved health, improved well-being and consistent stools.
From the perspective of the pet food producer, Leva-MOS provides a consistent and high-quality source of βGS and MOS that can be uniformly distributed in the feed, directly or via a premix.
All news items